The Sky Of Baronie

Welcome to this site, dedicated to the beauty of the sky of Sardinia...

The ephemeris of Pluto and some Plutoid, have been calculated for my observation point, the times are expressed in Local Civil Time, and the apparent geocentric equatorial coordinates, were calculated for the 0.0 hours on the day indicated, and refer to the equinox (2000.0).
In the calculation of equatorial coordinates the (TT) Terrestrial Time count was taken into consideration by applying a correction of 67 seconds (UT).
For the calculation I used the algorithm described by JEAN MEEUS, and the orbital parameters, are listed in the database of the Minor Planet Center, updated to January 2013.

Copy and paste this list into your Web page.

Ephemeris table of Pluto for the next 30 days:

Pluto, formal designation 134340 Pluto, is the second-most-massive known dwarf planet in the Solar System (after Eris) and the tenth-most-massive body observed directly orbiting the Sun. Originally classified as the ninth planet from the Sun, Pluto was recategorized as a dwarf planet and plutoid owing to the discovery that it is only one of several large bodies within the Kuiper belt. [ Wikipedia ]

Images of Pluto in Saggitarius. 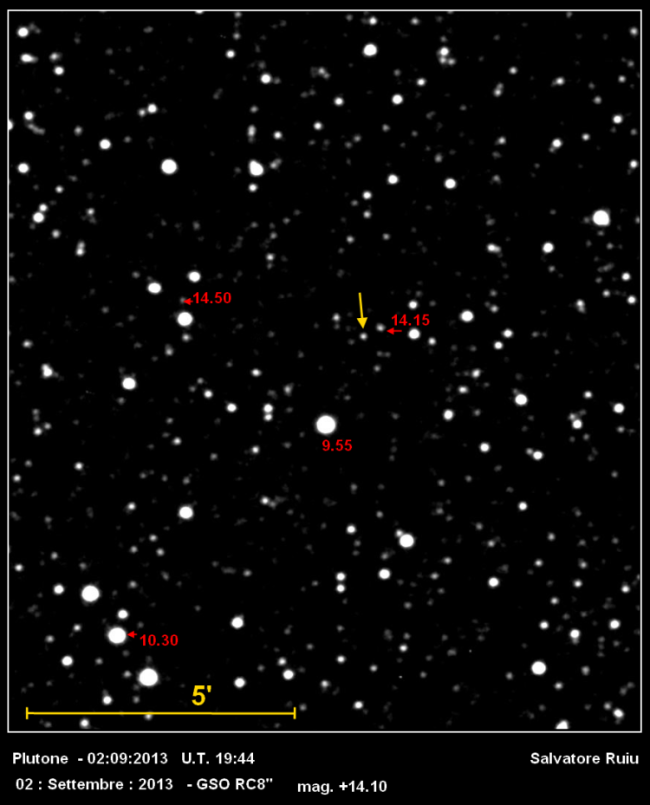 Varuna is a large classical Kuiper belt object. It previously had the provisional designation 2000 WR106 and has been precovered in plates dating back to 1953. The IAU has not classified it as a dwarf planet, but Brown and Tancredi consider it likely to be one, and Tancredi (2010) thinks that Varuna is very probably a dwarf planet. Varuna is named after the Hindu deity, Varuna. [ Wikipedia ]

Quaoar: is a rocky trans-Neptunian object in the Kuiper belt with one known moon. Several astronomers believe it to be a dwarf planet, and is massive enough to be considered one under the 2006 draft proposal of the IAU, though the IAU has not formally recognized it as such. Quaoar is named for the Tongva creator god, following International Astronomical Union naming conventions for non-resonant Kuiper belt objects. [ Wikipedia ]

Eris: is the most massive known dwarf planet in the Solar System and the ninth most massive body known to orbit the Sun directly. It is estimated to be 2326 (±12) km in diameter, and 27% more massive than Pluto, or about 0.27% of the Earth's mass. Eris is named after the goddess Eris (Greek), a personification of strife and discord. [ Wikipedia ]

Makemake: is a dwarf planet and perhaps the largest Kuiper belt object (KBO) in the classical population, with a diameter that is about 2/3 the size of Pluto. The name of Makemake, the creator of humanity and god of fertility in the mythos of the Rapanui, the native people of Easter Island, was chosen in part to preserve the object's connection with Easter.

Haumea: it was discovered in 2004 by a team headed by Mike Brown of Caltech at the Palomar Observatory in the United States and, in 2005. Haumea is the matron goddess of the island of Hawaii. [ Wikipedia ]

Sedna: is a large trans-Neptunian object, which as of 2012 was about three times as far from the Sun as Neptune, Sedna is the Inuit goddess of the sea, who is thought to live at the bottom of the frigid Arctic Ocean. [ Wikipedia ]

Orcus: is a trans-Neptunian object in the Kuiper belt with a large moon. It was discovered on February 17, 2004.
Under the guidelines of the International Astronomical Union's naming conventions, objects with a similar size and orbit to that of Pluto are named after underworld deities. Accordingly, the discoverers suggested naming the object after Orcus, a god of the dead in Etruscan and Roman mythology. [ Wikipedia ]

Ixion: It was discovered on May 22, 2001. Ixion was discovered by the Cerro Tololo Inter-American Observatory. It is named after Ixion, a figure from Greek mythology. [ Wikipedia ]